High display ad rates coupled with a decent increase in traffic made sure that December 2020 was the best month for my niche sites so far.

And unlike last month (when I reported a loss), this month, there were no major expenses.

A couple of noteworthy things happened in December 2020, but the highlight was the Google core update.

Impact of the Google Core Update

In the first week of December, Google decided to roll out a broad update to its core algorithm. This often leads to a major swing in rankings, and in most cases, there isn’t much you can do about it.

In my limited experience, a core algorithm update often means a loss in traffic. Since there are new sites maturing between every update, Google can afford to choose specific pages for specific queries.

For example, while your page may rank for the keyword ‘Dog Training’ as well as ‘small dog training’, an algorithm update can lead to a loss in traffic for the query ‘Small Dog Training’ while still ranking you for ‘dog training’.

Since there are more sites, Google can show a better result which answers the query better.

Coming back to my portfolio of sites, here is how the core update affected my sites:

Bought a Site and an Aged Domain

While I vow not to start any new projects in 2021, I did find a site on one of the platforms in a niche I am interested in.

It was making a few hundred dollars from Adsense and Amazon.  It’s in a broad niche and I can publish a lot of info content on it. Also, just by adding the site to Ezoic and improving the layout of the affiliate content, I have been able to lift the income by 30%.

I also came across a good expired domain in one of the niches where I was planning to start a new site.

I already had the keyword research done for it, so instead of starting it on a fresh domain, I decided to try doing it on an expired domain.

The good thing is that the domain already had some traffic and I was able to regain some ranking by simply recreating a few pages using Way Back Machine.

It’s in a competitive niche and I don’t expect it to make any money in 2021.

Now let’s get into the numbers.

If you’re interested in learning more about the sites, check out the first income report. 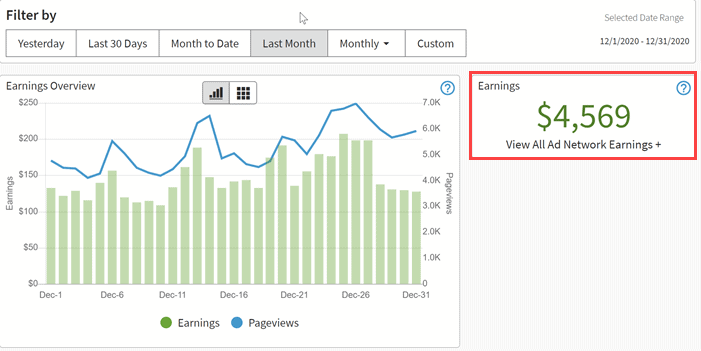 Now let’s have a look at the expenses.

Since I already bought a lot of content last month, the overall expense for December was low.

Expenses related to hosting and some of the plugins/tools are paid yearly. I will add these whenever they come up for renewal.

Since the ad rates plummet during the first two weeks of January, I expect the January numbers to be significantly lower.

What Am I Reading?

For December, my book club buddies chose the book – To Pixar and Beyond by  Lawrence Levy.

We wanted something light for the month, and this book fits the bill. It’s also the first book that I completed on Audible.

If you’re a Pixar fan like me, you may find it interesting.

My Favorite Tools and Services

Disclosure: Some of the links in this income report are affiliate links. So if you choose to use my links to make a purchase, it helps me with a little commission (without any extra cost to you, of course)